Whilst I’m  lucky enough to have spent several childhood holidays in Portugal, I had never been to either of the destinations planned this year, the capital city of Lisbon where I spent 2 days exploring and the beautiful medieval walled city of Obidos, conveniently situated for the great surfing beaches in Peniche where we were to spend the next 3 days.  I will eventually get around to writing up some of these meals in more depth but here is a little taster for you in the meantime.

Salt cod – known as Bacalhau in Portugal – is a mainstay of the Portuguese diet and makes an appearance on most menus in some way, shape or form. This was the first little snack we had once we arrived in Lisbon, at a small café in the historic old town of “Alfama”; Pasteis de Bacalhao a popular Portuguese snack or “Petiscos” made from salt cod, mashed potatoes, herbs and eggs and can be found at most cafes, bars and restaurants throughout the country. Of course I had to pair this with one of the local beers – Sagres in this case and the whole snack came to less than 2.5 Euros. 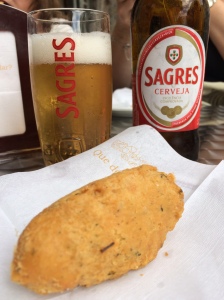 From here we made our way to the Market de Ourique, a newly renovated market and restaurant area where you can shop for everything from tinned anchovies to fresh vegetables, dried fruits, cheese and ham before sitting down in the communal area and exploring the restaurant stalls on offer. We shared this plate of “Porto Preco”  the Portuguese equivalent of Pata Negra – made exclusively from cured acorn fed Iberian Black Pigs along some beautiful peppery local Portuguese olive oil and bread.

Another local market that has been recently renovated is the Mercado de Ribera where I met up with renowned Portuguese food writer and walking tour guide Celia Pedroso for a late afternoon gin and tonic and some more “Petiscos”. This time we tried “Peixinhos da Horta” or “Little fish of the garden” which I was amused to learn are actually green beans fried in a tempura batter. Celia was a great source of information on Lisbon and Portuguese culinary traditions, not to mention great company and if you are planning on visiting Lisbon I would highly recommend making a reservation for one of her many interesting walking tours http://www.eatdrinkwalk.com.

In Obidos we stayed in an Air B&B holiday house and whilst we ate out at both lunch and dinner, here are a couple of our breakfasts. In the first image you can see a selection of Portuguese pastries (and Portuguese style croissants)  including the famous Pasteis de Nata made with rich golden egg custard as well as Bolo de Arroz a light and fluffy buttery cake made from rice flour and some lovely local Melon. The second day we finished off the melon and I had this little Spinach  Empadinha, where pastry is wrapped around a creamy spinach and onion center which was a slightly more unusual breakfast but delicious all the same.

The last of my Portuguese meals that I will not write a full post on was actually our first lunch in Peniche at the Prainha Restaurant and Wine Bar. Portuguese beach bars have certainly changed a lot since I was last here with all of the ones I visited offering a serious selection of wines (as opposed to just the one local white, red and rose) as well as cocktails and some really impressive cooking. This is my “Feijoada de Coco” a typical Portuguese stew made with beans and most often some kind of meat. Here it was served with cuttlefish and white kidney beans (common to the north west of the country) and a good handful of fresh herbs to finish, definitely the most unusual thing I have ever eaten in a beach bar but absolutely one of the most delicious 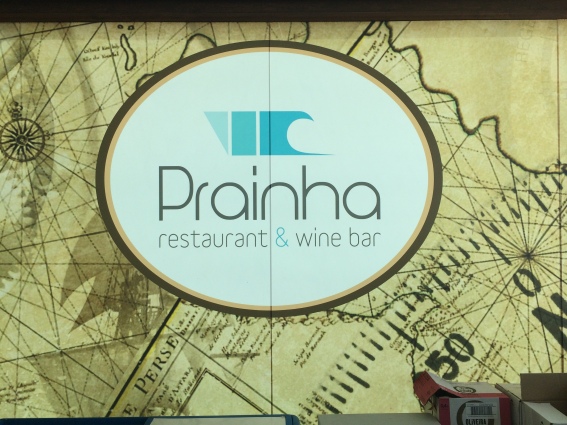 This site uses Akismet to reduce spam. Learn how your comment data is processed.

A blog about travel, expat life, and video games

We're all for enjoying #wine in sunny #Singapore!

"Tasting it to the streets..."