For many years The Blue Elephant was the most famous Thai restaurant in the world. The original restaurant was opened in Brussels in 1980 by Thai chef Khun Nooror Somany Steppe and her Flemish husband and further branches in London and Paris soon followed. They now operate 11 restaurants in places as diverse as Copenhagen, Lyon, Dubai and Malta but it was not until 2002 that The Blue Elephant actually opened here in Bangkok in a beautiful old house (dating back over 100 years) that was used by the Japanese as their central command centre during the Second World War. 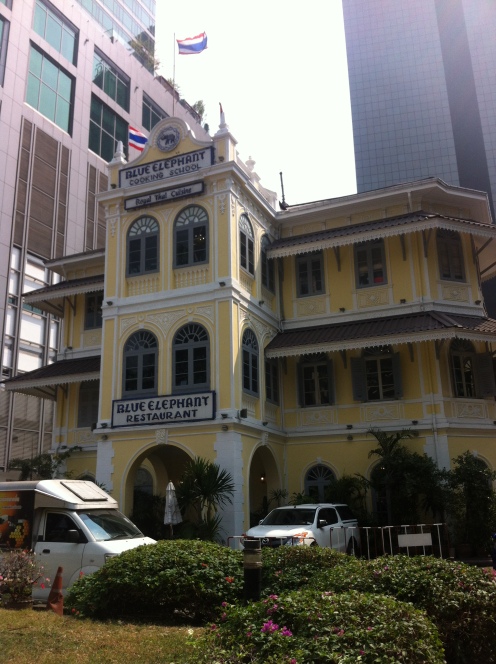 I had seen that they had a promotion on ENSOGO (a Thai discount website similar to Groupon) where you could attend an afternoon class at their World renowned cooking school for 1600 THB as opposed to the usual 2943 THB and thought it would be a good opportunity to visit.

I was happy to see that we were only to be a class of two and our cookery instructor was lively and engaging – deviating from the recipes occasionally because she liked the dish better with chilli added even if it was not supposed to have any and so on. The class was such that we first watched her prepare the dish and then once completed we were allowed a taste to ensure we could match the right flavour before preparing the dish ourselves.

First up was “Kao Tang Na Tang”  Little rice crackers with diced prawn and chicken and then cooked in coconut milk to make a dip. I was surprised at how quick and easy this was to prepare – you just make a paste from dried chillis, garlic, coriander root and shallots which is then cooked down with some palm sugar, fish sauce and coconut milk before adding the prawns until just cooked and finishing with peanuts. This was not something I had tried before as I think it has quite a unappealing, sludgy looking appearance but it was in fact very flavourful and I enjoyed it more than I was expecting. 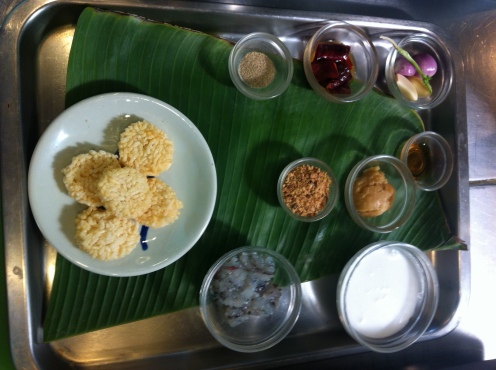 Next up was supposed to be a beef and pumpkin curry although they kindly let me swap out beef and instead I got to prepare “Kaeng Phed Pla Fuk Thong” Pumpkin curry with red snapper. Whilst the chef demonstrated how to make a curry paste I was a bit disappointed that we were given readymade paste to work with although even then it was interesting to see all the other additional ingredients that were added to the final recipe. 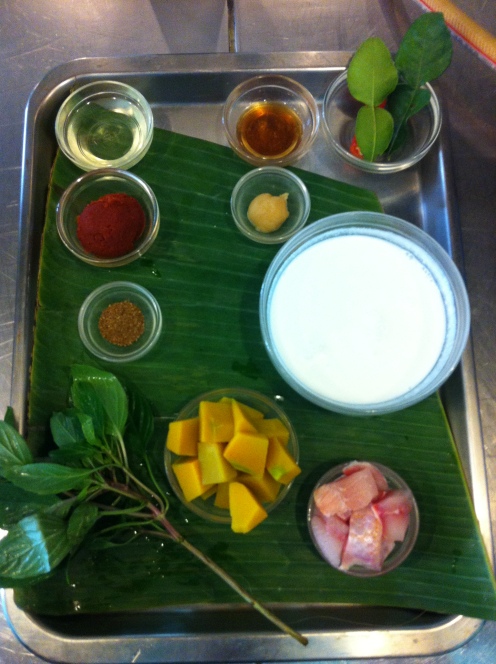 I think I may have been spoiled by the outstanding cookery class we did in Bali https://beirutibrit.wordpress.com/2013/07/19/sate-bali-cooking-class-seminyak-bali/  where we made several pastes and sambals from scratch and whilst my arm muscles were relieved not to have to spend all that time using a mortar and pestle, I did think this was a bit of a shame.

Our third dish was “Kai Phed Nam Mak Kham” Stir fried chicken in tamarind sauce. This was another surprisingly quick and easy dish to prepare, the vegetables can’t have been in the wok for more than 2 minutes and I found the addition of little cubes of dried taro (which I had originally mistaken for tofu before tasting) interesting. 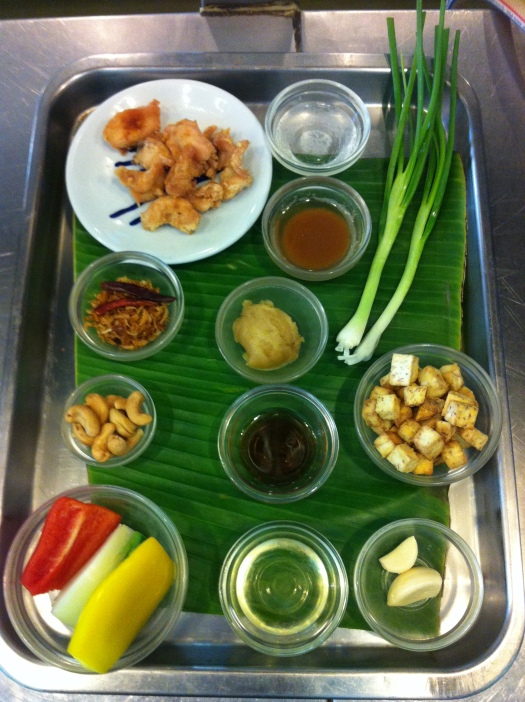 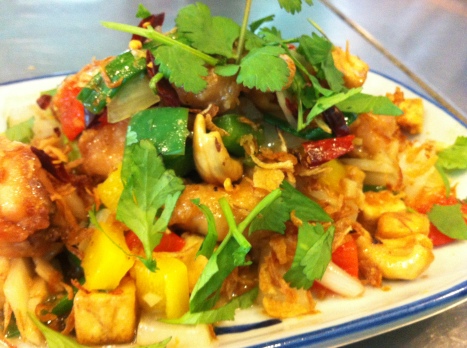 To end the class we prepared “Kao Maan Som Tom” Sticky rice with papaya salad. They had already prepared the rice by cooking it in coconut milk and we simply cooked it for a few more minutes in pandan water to add a little more flavour. The som tum recipe was a little bit different to the ones I usually have in that it did not have peanuts or long beans inside and we used dried chilli instead of fresh, making it interesting to see how these subtle changes impacted the flavour. I was pleased to get the balance of sour and salty correct on my first try with no need to make any adjustments before serving which I had not been expecting, good to see I am picking these things up! 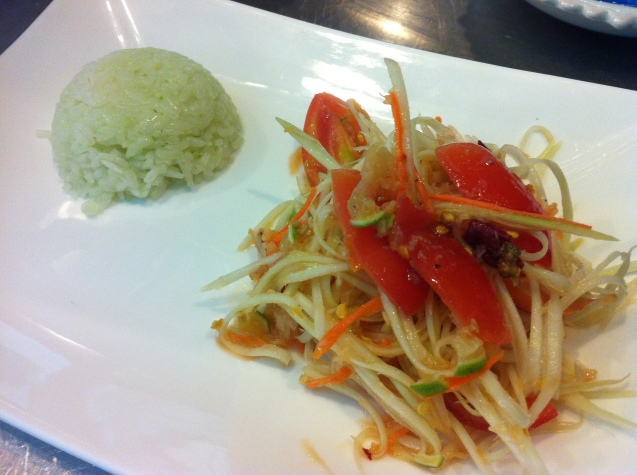 When the class was over we were able to choose to take the dishes away or to head downstairs and eat in the restaurant which I did along with a Singha beer which set me back a somewhat staggering 220 THB!! The restaurant is really beautiful and whilst it is not somewhere I would visit as I am not a huge fan of the refined “Royal cuisine” they serve I can certainly see why it is so popular with visiting tourists although for the same price I would far prefer to go to Bo.Lan and have a more interesting meal. 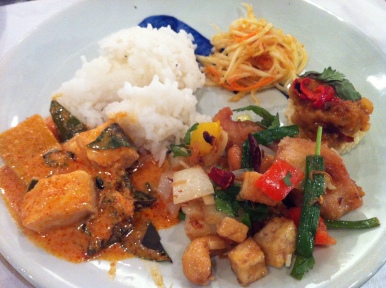 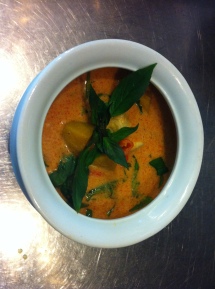 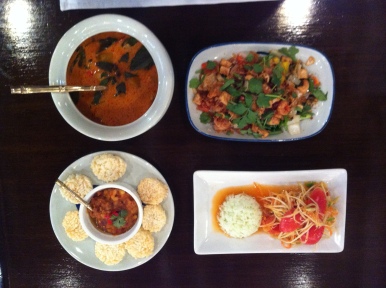 I did enjoy the class but I think it was maybe a bit basic for me, whilst I don’t get to cook these days; it is something I enjoy and am not too bad at it. My food related Thai is also improving and I am able to pick up a lot from our chefs at work too so maybe I am being unfair. Having said that, the class would be great for a beginner or someone who is new to Thai cuisine, it is incredibly well set up, the instructors are friendly and speak great English making it a good learning environment and there can’t be many more attractive dining rooms in which to eat your meal in when you have finished.

The Blue Elephant is just next to Surasak BTS and you can find details on their classes here http://www.blueelephant.com/cooking-school/cooking-classes-bangkok-2/

This site uses Akismet to reduce spam. Learn how your comment data is processed.

A blog about travel, expat life, and video games

We're all for enjoying #wine in sunny #Singapore!

"Tasting it to the streets..."